My Shortcut craftsmen are THE BEST. Not only was I able to produce my silver necklace pieces on their CNC mill (1), but also got a major advice point on my laser cutting skills (2).

(1) The 1.5mm silver plate was sandwiched between a 1mm plastic sheet. The sheet was covered with double sided adhesive paper on both sides. Then the silver plate was attached. My colleague was so kind to help me set up the machine – measuring depth of complete sandwich, setting speed of machine, depth of engraving/cutting and adjusting the z-axis. I brought my own tools along: a 36° graver for the contour of the underwear and the 1.6mm ∅ single tooth cutter. The procedure of the machine was to engrave first and then cut, since the material might move if done vice versa. 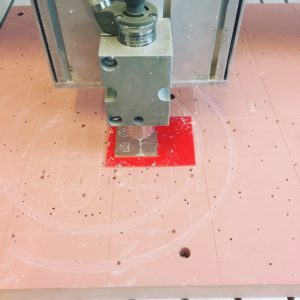 The engraving was quickly done and had the desired outcome. Only the cutting decided to be difficult. On the last line the tool broke off. Apparently, the vibrations of the silver plate were too intense and after heating up quite a bit, the tool broke. 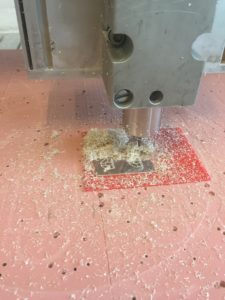 On the plus side: The job was completed! And because of the adhesive layer, the silver was collected in a sort of foam party around the milling tool.

(2) My laser cutting skills for Onnerboegs just got a boost (I think). Some of the pendants had the mark line of where the laser started and completed the path. I was really frustrated as to why this problem occurred. Now I received a hint from my colleague what the reason for this dilemma might be. 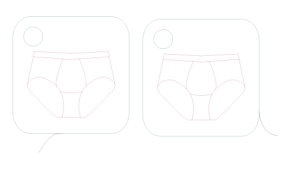 So the best way to not have the start and end point mess up some of the pendants is to have a lead in line! The laser starts on a different point than usual and gets fed into the curve. I will try this soon!