Next version of Onnerboegs cufflinks are on the way to the 3D printer! Now two types are included: The underwear is embossed and engraved, respectively. See below: 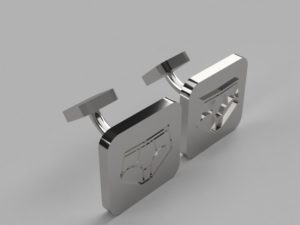 I enlarged the outlines as well as the extruded areas of the undies to 0.5mm. Let’s hope the 3D printer is happy this time around!

One issue is still bothering me in this design: the undies contour was drawn in Adobe Illustrator with nice, well-rounded curves. Now when I import it to Fusion 360 the splines are not transformed into polylines even though I downloaded an add-in that should do the job. I drew some arcs with Fusion 360, however the outcome is not as smooth as with Illustrator. Maybe the lovely Fab Lab people can help.